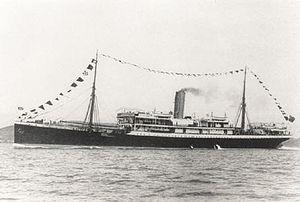 On this day, one hundred years ago, our country suffered its most devastating maritime disaster when 616 South Africans perished in the cold waters of the English Channel.

607 of these victims were black South Africans enlisted in the 5th Battalion of the South African Native Labour Corps – a workforce sent to assist the British war effort in the First World War.

These men were told by the South African government that they could not enlist as soldiers and they were denied the right to carry weapons. But this did not stop more than 80,000 black and coloured South Africans from volunteering their service over the course of this brutal five year-long war.

For many of them, this service exacted the ultimate price.

When the SS Mendi was rammed by a larger cargo ship in the pitch black night and thick fog at five o’clock in the morning of the 21st of February, it ripped a gaping hole in her starboard side. The ship was doomed and sank within 20 minutes.

Many of the men on board went down with the ship, trapped below her decks. Most of those who managed to jump overboard either drowned or died from exposure in the dark, freezing waters 11 miles south of the Isle of Wight..

These were men who had never been at sea before. Few of them could swim. And here they were, thousands of miles from their families and their homes, dying for a cause for which they were not allowed to fight.

Before leaving, they were told that their service and their lives meant less than those of white enlisted soldiers, but still they volunteered. They chose to serve alongside troops who would be remembered as heroes while they would be left out of history.

But they did so because the cause was bigger than them. The world was in grave danger, and through their service they could help deliver us all from the march of tyranny.

The oral history of this battalion’s final moments tells of hundreds of men who met their fate with courage and dignity. Men who stood together – amaXhosa, amaSwazi, amaMpondo, Basotho – as brothers unhtil the end, singing as the ship sank beneath the waters.

For almost a century, the sacrifice of these 607 black South Africans was barely recognised. They weren’t eulogised like their white counterparts; they weren’t decorated with medals and honoured with monuments. Throughout the 20th century this tragedy was all but lost in the selective writing of history.

In 2009, the UK Ministry of Defence finally declared the Mendi’s wreck site a protected war grave. Today there are memorials to the men of the SS Mendi in Britain, France and here in South Africa.

Today, a hundred years after this tragedy, we pledge that we will never forget those who sacrificed all for our freedom. Men who were not yet free themselves in the land of their birth, but who laid down their lives so that the world could be free.

We salute the brave men of the 5th Battalion of the South African Native Labour Corps. History will remember you for the heroes you were.