Muizenberg was established by the Dutch in 1743 as a military post on the road between Cape Town and Simon’s Town. The village was named after Wynand Willem Muijs, sergeant in charge of the post in 1844, and later commander of the Cape.

The railway line from Wynberg reached Muizenberg on 15 December 1882.

Muizenberg was originally merely a halt on the long road between Table Bay and Simon’s Bay, a turnpike (first in the country) and a military watch.

The small, rather shambolic, but historically pivotal Battle of Muizenberg in 1795 led to the British taking initial control over the Cape from the Dutch (finally cemented at the Battle of Blaauwberg). The remnants of the fort of that battle can still be visited.

It was only in the 1820s that the establishment of an inn of rather dubious repute began the transformation of Muizenberg to the holiday resort it became. Called Farmer Pecks Inn, it became an important stopover for travellers on their way from Cape Town to Simon’s Town, and raised the entertainment profile of the area. They put up the first bathing box. Other private bathing boxes began to appear (the strict social codes of bathing were a far cry from the casualness of today) and, with the arrival of the railway by the late 1800s, land was sold for residential development and people were thronging to the white sands of Muizenberg, immortalised by regular visitor Rudyard Kipling in his poem ‘The Flowers’: “Buy a bunch of weed/ White as the sand of Muizenberg/Spun before the gale”.

Added impetus was provided by Cecil John Rhodes, who built a house there and encouraged his friends and colleagues to do the same. The arrival of the new mining magnates from Kimberley and Johannesburg provided a shimmering seal of approval, and many of their mansions can still be viewed along what was then known as Millionaires Row.

After the Anglo-Boer War, the area was considered a good tonic for soldiers, and the town began to pay proper attention to its popularity with new bathing boxes, pavilions and a handsome new Edwardian railway station befitting its status. In 1911, the first aeroplane to deliver mail in South Africa made its maiden voyage to the postmaster at Muizenberg. The village was transformed.

Muizenberg was the birthplace of prone surfing in South Africa (1910) and introduced the first stand-up surfing in 1919. 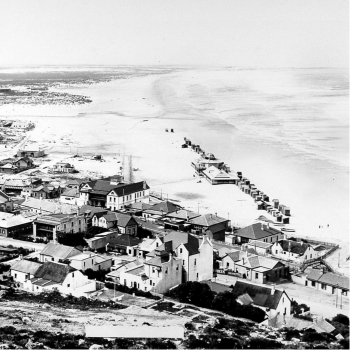