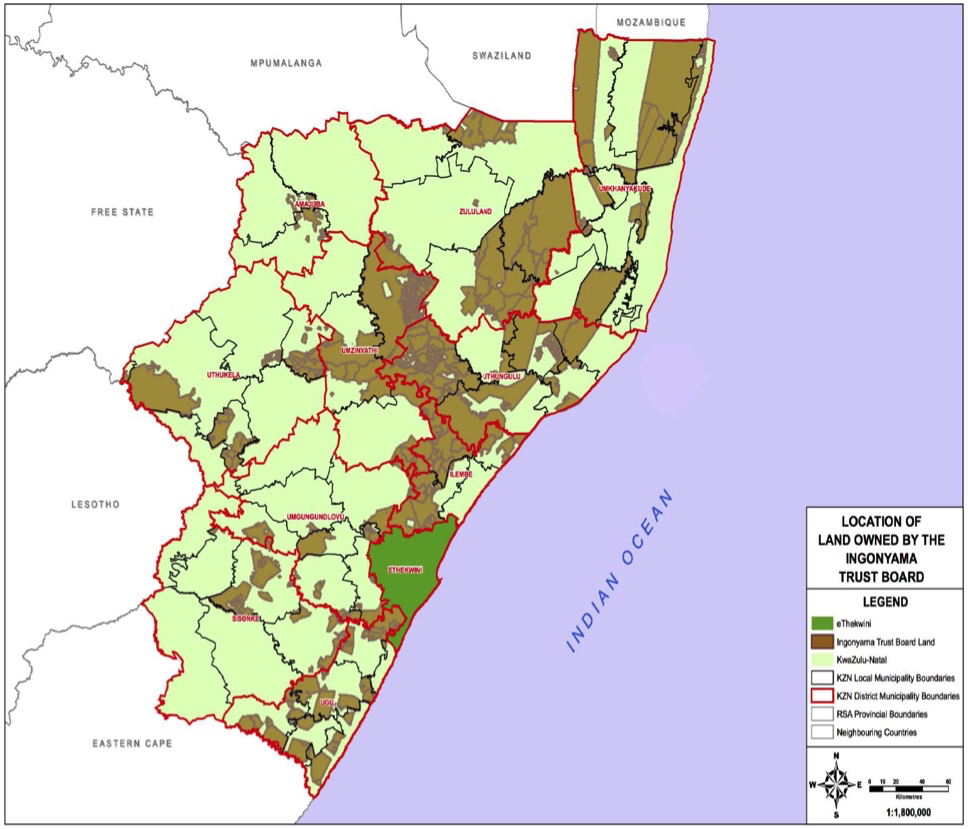 Following the publication of a headline article in the Mail & Guardian on 8 August 2019, purporting to reveal the “full story” behind the Ingonyama Trust Act, the National Executive Committee of the Inkatha Freedom Party wishes to set the record straight.

The History of the Act

With the 1994 elections, all the land of the TBVC states and the self-governing territories was set to automatically become the public property of the central government, administered in terms of the Land Administration Act of 1993.

This meant that all the land of the Zulu nation, which had been administered for generations as communal land under indigenous and customary law, would suddenly become Government property. Millions of people would no longer share ownership of the land with the group rights this conferred, but would find themselves, overnight, squatting on State-owned land with no security of tenure.

Prince Mangosuthu Buthelezi therefore sought to design legislation that would take the land of the Zulu nation out of the territory of KwaZulu and place it in a Trust, so that it could continue to be administered as it had always been, as communal land under indigenous and customary law.

He engaged the expertise of his constitutional advisor, Dr Mario Oriani-Ambrosini, and Professor Willem Olivier, the IFP’s representative in the Constitutional Committee. As lawyers specialising in constitutionalism and communal property rights respectively, they were ideally suited to draft this legislation.

The KwaZulu Legislative Assembly was well within its rights to pass such legislation. It neither needed nor sought the consent of the National Party Government.

However Prince Buthelezi had no intention of doing anything in secret. A copy of the intended Act, together with its schedule, was given to the ANC’s Mr Joe Slovo and several of his colleagues on 8 April 1994, at the Skukuza Summit.

Prince Buthelezi spoke personally to President FW de Klerk. The KwaZulu Government had rejected independence. It had never become a Bantustan. Thus, legislation passed by the KwaZulu Legislative Assembly had to go to the Head of State for signature after it had been passed. As the KLA was winding up ahead of the 1994 elections, Prince Buthelezi consulted the President on the dates to determine whether legislation could still be finalised at that point. President de Klerk thus knew that the KLA intended passing last minute legislation.

The KLA was of course well aware that the President could still refuse to sign the Act. But it was compelled to pass this legislation on the eve of the elections, as this was the last and only chance it had to maintain the few pieces of land still remaining to the Zulu Kingdom after years of colonialism and dispossessions.

Thus the Ingonyama Trust Act was passed by the KwaZulu Legislative Assembly on 22 April 1994 as the last piece of legislation of the Assembly before the 1994 elections.

After it was passed, the Act was indeed signed by the Head of State. Like all existing legislation, it was subsequently considered by a democratic government, and was retained with amendments. Thus the Ingonyama Trust Act has been legitimately in force in a democratic dispensation for 25 years, and has been recognised by the Constitutional Court.

The History of the Negotiations

From the start of the constitutional negotiations, the IFP believed that the Zulu King should be represented. Yet the ANC and National Party Government had barred the King from participating. This was extraordinary, as every significant role player had a place around the negotiating table.

As the traditional Prime Minister to the Zulu Monarch and Nation, Prince Buthelezi sought a definition of the role of the monarchy and traditional leadership in a democratic dispensation. This became a contentious issue which was intended to be resolved through international mediation.

It was then that the IFP withdrew from participation in the elections as it was felt that good faith negotiations had collapsed.

The Kenyan diplomat Professor Washington Okumu intervened at that point, travelling between Prince Buthelezi, President de Klerk and Mr Mandela, to broker an agreement that was acceptable to all, and which would enable the IFP to participate in the elections.

Fortunately, agreement was reached. All the conditions of the agreement were captured in the Memorandum of Agreement for Reconciliation and Peace which was signed by President de Klerk, Mr Mandela and Prince Buthelezi on 19 April 1994.

In terms of the Agreement, international mediation would be reconvened as soon as possible after the elections to resolve the outstanding issues of the Zulu Kingdom. On that basis, the IFP was brought into the 1994 elections.

Nowhere in the Memorandum of Agreement is there any mention of the transfer of land, or of a trust being established, or of an act being passed, because this never featured in any discussions, negotiations or agreements.

The Ingonyama Trust Act was conceived, drafted and passed without any deals being struck. It was a separate issue to the negotiations, where the word “land” was never mentioned.

The discussions between Mr Mandela, President de Klerk and Prince Buthelezi on 19 April 1994, and the subsequent Agreement that they reached, was comprehensive. In fact, Prince Buthelezi insisted in that meeting that the Interim Constitution be amended to enshrine the existence of the institution of the monarchy. He insisted that Parliament be called back to sit for one day to include this in the Interim Constitution; which is what happened.

The IFP sent Prince Gideon Zulu, Inkosi Bonga Mdletshe and Reverend Sipho Nzimela to Cape Town to attend the one day sitting of Parliament. It was the first time anyone had seen leaders in traditional attire inside the Parliament of South Africa.

False Allegations in the Mail & Guardian

It is deeply disturbing that the Ingonyama Trust Act is now being portrayed as some sort of bribe made in secret by the apartheid regime to “pacify” Prince Buthelezi and persuade the IFP to participate in the elections. The implication is that the Trust is the result of a dirty deal, which strips it of legitimacy. This is absolutely damaging and false.

The NEC of the IFP wishes to place on record that the Mail & Guardian was well aware of discrepancies in the timeline it published. Before publication, Prince Buthelezi placed facts in writing before the Mail & Guardian which explicitly contradicted the assertions they intended to make. The Mail & Guardian was asked to delay publication until they were able to properly consider the new facts before them and adjust the article accordingly. However, they chose to forge ahead and publish an article which they reasonably knew to contain false information.

Possible avenues of remedy are being considered, but the IFP’s NEC felt it important to place these facts on record as the present national debate around the Ingonyama Trust Act is highly sensitive. The truth must take centre stage.