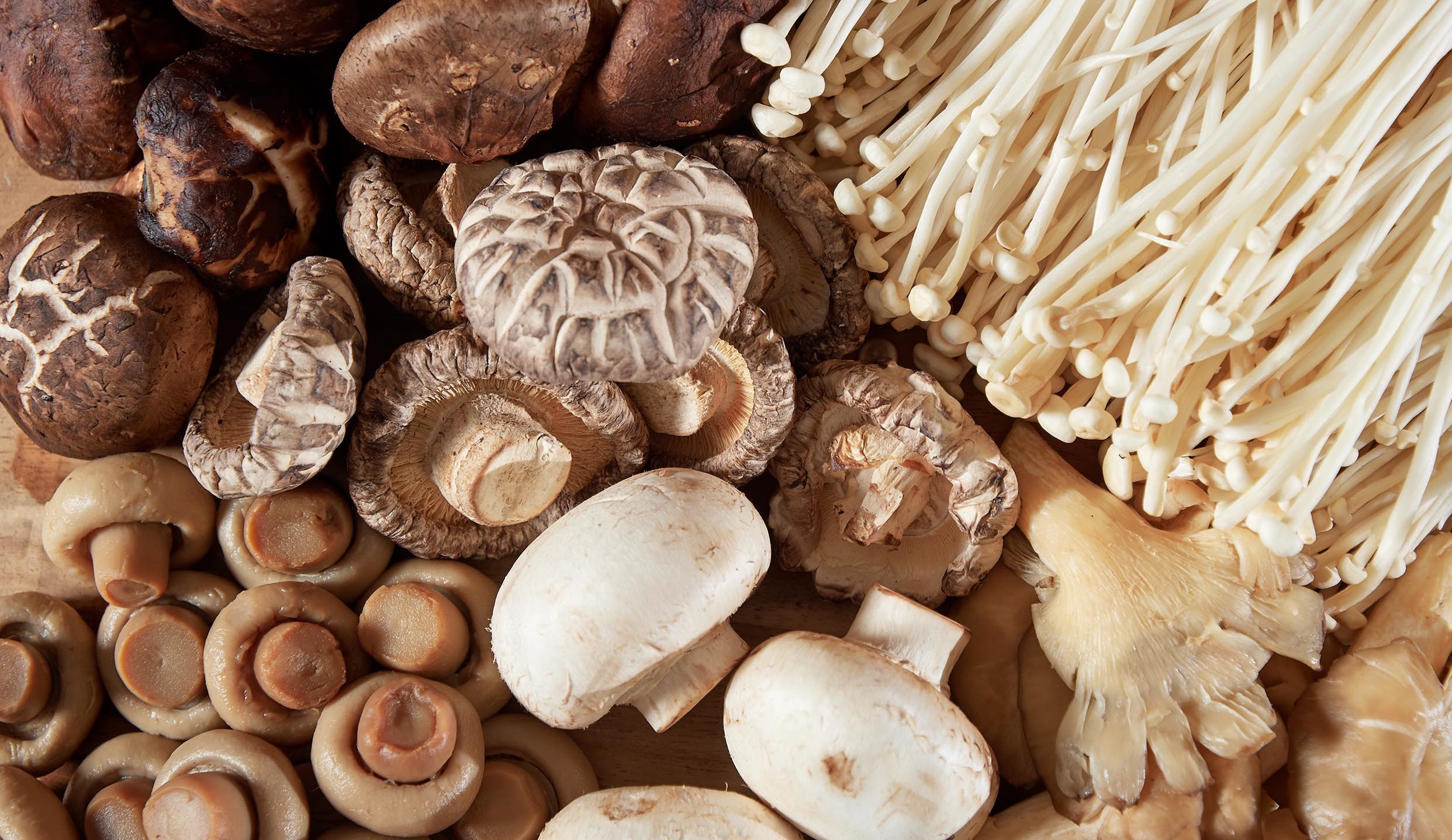 Life is a Garden

As fungi, mushrooms are biologically distinct from any other food group and have a unique nutrient profile. They make a delicious addition to a meal, add magic to the garden and are great for healing the body.

History of the mushroom

The word mushroom is derived from the French word for fungi. As early as 1651, fungi became popular in Europe, having been discovered in the vicinity of Paris. They were also consumed centuries ago in Middle and South America. Finally, in 1707, the first controlled cultivation of edible fungi in the vegetable garden was completed, and so the delicious mushroom was introduced into our human diets. Now every year, millions of mushrooms are cultivated worldwide.

Since the first cultivation of mushrooms, many varieties have popped up around the world. Ranging from edible, poisonous and medicinal, it’s important to know your way around the mushroom garden. Here are some of the most important fungi families you need to get to know:

Starting with edible varieties, there are so many to choose from to add flavour to your dinners. The White Button mushroom is one of the most commonly grown mushrooms throughout the world. It’s eaten by millions of people every day – and with a little culinary spice, it’s anything but boring. The cap of this mushroom spans 3 to 16cm, while the stem is 2 to 8cm long. White in colour, this type of mushroom often has brownish bruising.

Another popular mushroom is the Oyster mushroom. One of the first things you should look for when trying to identify this mushroom is the presence of decurrent gills. These gills are attached to, and run directly down, the stem. These guys are white to light brown in colour and often grow in a shelf-like formation with overlapping clusters. 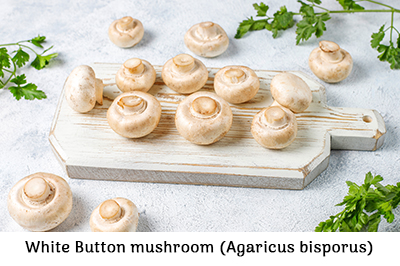 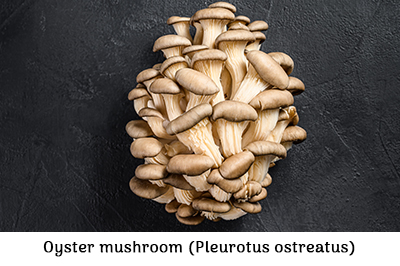 Porcini mushrooms are a famous, and delicious, addition to Italian dishes due to their strong nutty flavour. As the Porcini matures, its cap can grow up to 30cm in diameter and then flattens out. The reddish-brown cap darkens with age and fades to white along the cap margin. The stem is club-shaped or bulging in the middle.

Another tasty fungi is the Field mushroom – which has a white cap and, on occasion, may have fine scales. The stem grows 3 to 10cm tall and is predominately white, bearing a single thin ring. Be careful when munching on this mildly flavoured mushroom when it begins to show signs of yellow bruising. This bruising can cause the fungi to become somewhat toxic and inedible.

The soft, corky and flat Reishi mushrooms are one of the oldest medicinal mushrooms known in our world. Appearing to look like it has been red-varnished, the cap features an underside of white pores containing fine brown spores. The enchanting Reishi grows at the base and stumps of deciduous trees to form a picturesque storybook scene. With such recognised herbal healing powers, it is nice to know that the Reishi mushroom is also an incredibly easy mushroom to grow.

The final garden favourite of our edible mushroom range is the Shiitake. What comes to mind when you think of these tasty mushrooms is the health benefits, as well as your favourite Chinese restaurant meals. Shiitake begin their lives with dark brown to black caps, which become lighter brown and more convex with age. The undersides exhibit white gills that do not attach to the stem. The stem is smooth, fibrous, and light brown with no ring. The Shiitake mushroom also has many medicinal properties to assist in getting your body into a great condition. It supports your immune system, destroys cancer cells and helps with heart health. 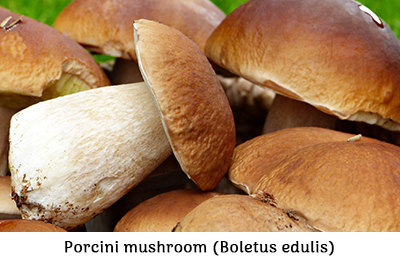 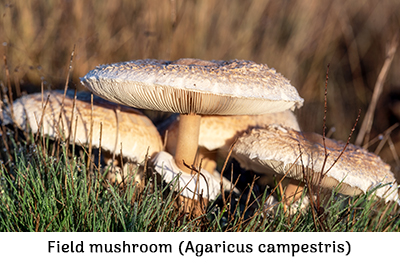 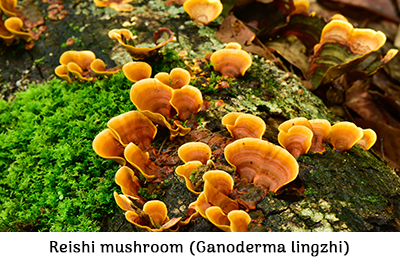 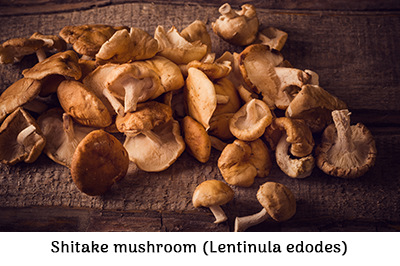 Although there are so many delicious mushrooms in the wild that you can pick and eat, there are a lot of poisonous ones to stay away from.

By far the biggest culprit is the Amanita phalloides – or the Death Cap mushroom – which occurs throughout South Africa. Ingesting it can be dangerous – it accounts for 90% of all fatal mushroom poisonings. The toxins from this mushroom attack your liver and kidneys. Look out for a pale yellow to a light-olive cap, which grows from 5 to 15cm in diameter. The gills are white and the spore print is also white. It’s definitely not to be snacked on!

The Copper Trumpet, also commonly known as the Jack-o’-lantern mushroom is orange to yellow in colour and, yes, it is poisonous. Although enchanting with its large, funnel shape and gills that are bioluminescent, which glow in the dark, this mushroom is filled with a compound called luciferin. Rather observe its beauty than try and have this fungi for lunch.

The False Parasol mushroom is the final fungi we will be discussing. It has a convex cap at full maturity, that grows from 5 to 40cm in diameter. The gills are white when young and turn green with age. The mushroom then turns a dingy red when bruised. The stem grows from 5 to 25cm tall and 1 to 4cm in diameter. It is highly poisonous, producing severe gastrointestinal symptoms of vomiting and diarrhoea. 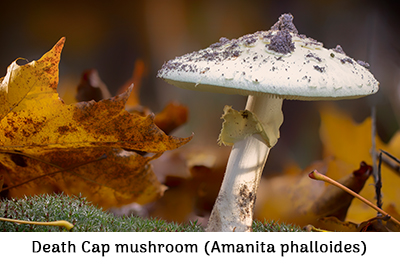 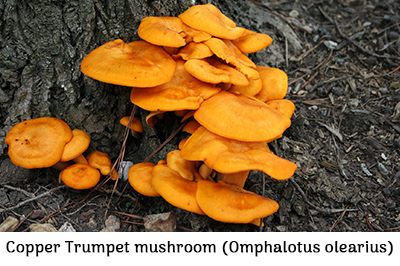 Mushrooms in the garden

Knowing how to identify mushrooms is interesting knowledge to have. This awareness of fungi fundamentals can enable you to begin growing your own abundance of mushrooms in your garden at home – leaving those wonderful wild mushrooms to stay free and uncultivated.

Different mushrooms grow in particular settings. As such, be sure to find out what kind of medium you will need for the species of spores that you have purchased.

The most popular choices of mushrooms are Shiitake mushrooms, Oyster mushrooms and White Button mushrooms. To grow them yourself, you first need to buy a selection spores, or even spawn – these are quite easy to find online. Spores are like seeds for mushrooms, while spawn are like the seedlings, so either can be used. However, for home growing, spawn is much easier to use.

Shiitake mushrooms usually grow on hardwood or hardwood sawdust, while Oyster mushrooms prefer an environment of straw and Button mushrooms grow from the nutrients of composted manure.

Be sure to find out what kind of medium you will need for the particular species of spores or spawn which you have purchased. In general, mushrooms like a cool, dark and damp place to grow in. If you have a basement or wine cellar, this is the perfect place for mushroom growing, otherwise, it is also fine to use an old unused cupboard or trunk. As long as you can control the temperature, humidity and keep the area in relative darkness, your mushrooms will thrive.

Once you have chosen the mushrooms you want, and have collected their correct growing medium, there are basic steps for growing the mushrooms that remain, in most instances, the same.

Place the growing medium in a pan and raise the temperature to about 21 degrees Celsius in the area you have chosen to cultivate your fungi friends. One can easily use a heating pad to achieve this.

After about an hour, the medium should have warmed up nicely, and you can then place the spawn on it. About three weeks should pass when the spawn will have rooted, which means the filaments would have spread into the growing medium. At this stage, you need to reduce the temperature to around 15 degrees Celsius.

Cover the spawn with two to three centimetres of potting soil, and then cover the pan and potting soil with a damp cloth. It’s important to keep spraying the cloth, as well as the soil as they dry, to keep both moist.

It should take about three to four weeks before you see the little mushrooms appearing. Shiitake mushrooms take a little longer and will be ready in about seven to eight weeks. They will be ready to pick once the cap has fully opened and has fully separated from the stem.

Fungi make an exciting and wonderful addition to any garden. Once you have mastered the art of growing mushrooms, you will have a lot to go around, and the next fun step will be finding new and exciting ways of preparing your home-grown mushrooms. Happy mushroom farming! 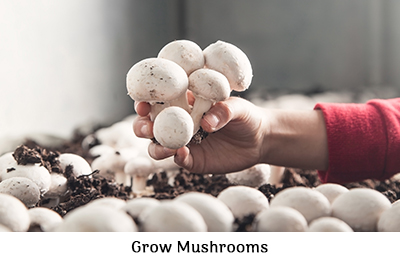