Glencairn and the Else (also referred to as Els) river valley are located on the coast of False Bay, between Fish Hoek and Simon’s Town.

In 1743 the Dutch East India Company established an official station and anchorage at Simonstown. An early map, drawn in 1870, shows the course of the river which was originally known as the “Elze Rivier” (Burman 1962). Throughout the early days of the Cape settlement, Else Bay (Glencairn beach) was mainly known as the last hazard on the difficult road to Simon’s Town, and other than a few fisherman who trekked from the beach, it was little disturbed – Tredgold (1985)

In 1811 the farm Elsje’s River was granted to Christoffel Brand, its main product being vegetables. Another farm called Elsje’s Baai was operated as a tannery. There is no mention at this time of the earlier farm Hartenbosch which was located in the area now known as Da Gama. Further up the valley was the farm Brooklands, which was where the water treatment facilities are now located. – Tredgold (1985)

Welcome Farm incorporated the Welcome Glen suburb and Naval Sports Fields. At Welcome Farm there was a mill to which farmers brought their corn to be ground. The farms raised cattle and grew vegetables – Tredgold (1985)

Glen Cottage, 36 Glen Rd was used as Rest & Recreation by the military during the Boer War

It is not known for certain how the former name of Glencairn, Else Bay, or the name of the Else River originated. Various theories are reviewed by Clifford (2003), favourite being that Rooi Els trees (Cunonia capensis) formerly grew along the river. However, none have been encountered during this study, and attempts by the local community to re-establish these trees in the vlei and lower river areas have largely proven unsuccessful. The second refers to a ship, the Esselstein, which stopped over in Simon’s Bay in 1671. Thereafter Simon’s Bay was referred to as Esselstein’s Bay, and the Else River as Esselstein’s River.

Cobern (1984) describes how a probable error in the transcription of maps could have led to the word ‘Elsestein’, the shortened version of which is ‘Else’. He further suggests that the careless translation of ‘Else Rivere’ from Dutch to French and finally to English, ‘Else’s River’, could have led to the further error, perpetuated to this day, of referring to Elsies River and Elsies Peak. Else Bay was later renamed Glencairn by its early Scottish residents, after the Glencairn area in the North of Scotland – (Clifford 2003).

The quarry was opened in 1898 (possibly earlier) adjacent to Main Road and the railway line. The quarry was operated by the Divisional Council and possibly closed between 1914 and 1918. Thereafter Strong and Moore re-equipped the workings and were still operating the quarry when it was closed in May 1978 due to environmental concerns, and appreciation of the tourist potential of the area.

The Cape Glass Company exploited the light grey sands found along the bottom of Glencairn Valley between 1902 and 1906. The industrial remains of the factory now form part of the Simon’s Town Museum’s collection.

The Cape Glass Company bought the railway siding built for the Salt River Cement Company and a narrow gauge cocopan that extended up the valley. The limited literature available on the company suggests that they were mining sand, but Clifford (2003) suggests that they were removing limestone. No evidence of its original presence remains.

Glencairn’s quicksands no longer exist and were stabilized by a change in the river’s discharge conditions caused by the construction of the railway embankment in 1890.

Welcome Glen farm Deed of Grant completed in 1811, Welcome Cottage built between 1812 and 1815. it came into the possession of the de Villiers Family in 1871, remaining in the family for over a century. Over the years they produced vegetables, flowers, bark for tanning purposes and latterly, dairy produce. The land was sold to the Navy in 1970, except for 6 morgen on which the cottages stand. They were subsequently expropriated in 1974. Welcome Cottage no. 440 has been slightly altered by the addition of an enclosed stoep and a new roof, but otherwise remains un-altered with yellowwood beams, door and flooring, 5 traingular gables surmounted by pedimental caps

Stegman’s cottages built in the 1892 by a farmer from Durbanville, who built a beach house at what is now 24 Fairburn Road

In 1928 there was a private Native Location near the old Glass Works. It consisted of 25 dwellings and a school (pg 37 Glencairn Mission School?). The Health inspector recommended it be closed and it was cleared in 1931.

The squatter-like shack community in what is now Glencairn Heights was associated with the Strong & Moore Quarry. The community was relocated under the Group Areas Act. A Wesslyan Mission School existed there years before, followed by a mission school and church. 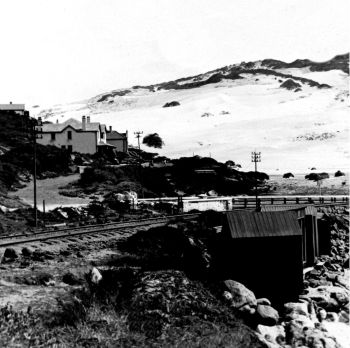