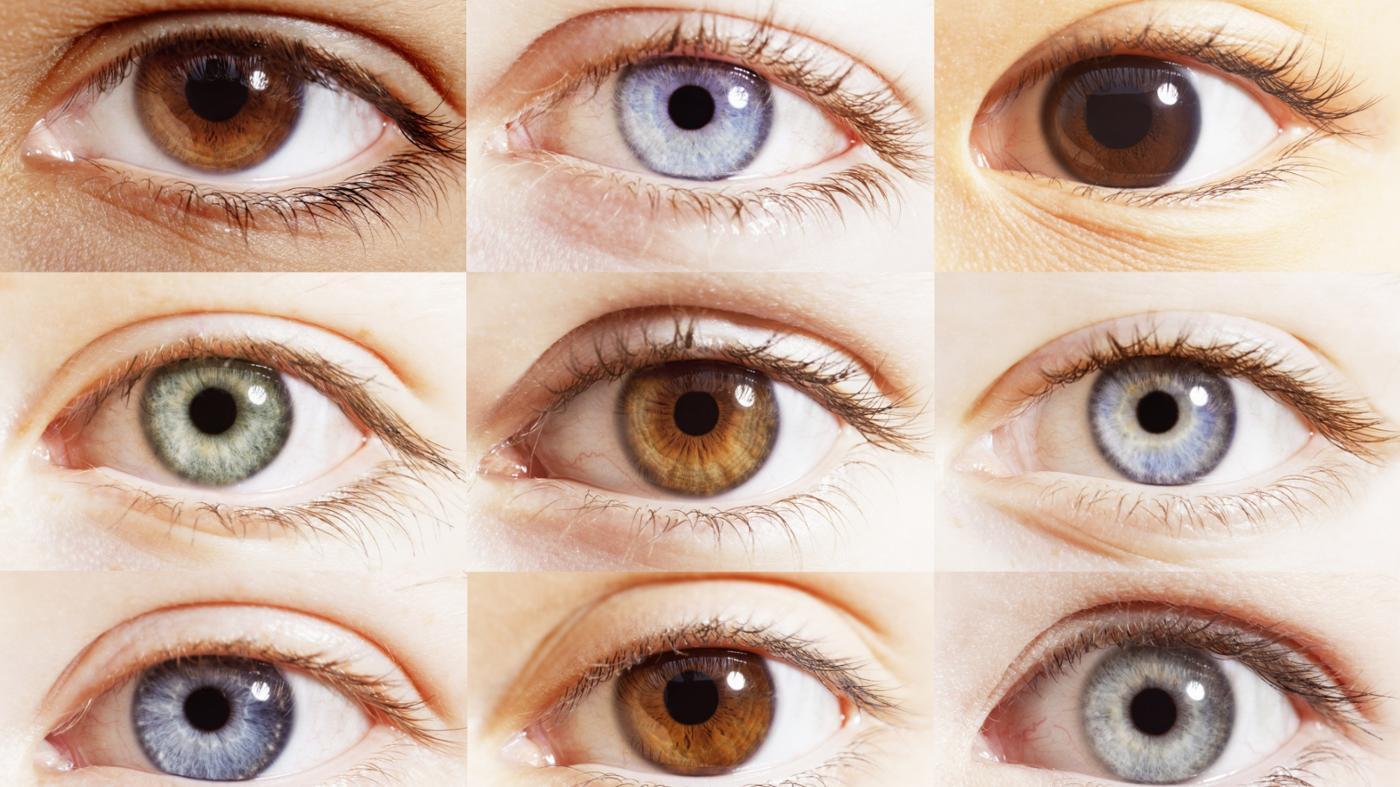 No one else in the world has the same eye colour as you. Contrary to popular belief, eye colour is not simply the result of a combination between the colours of your parents’ eyes; rather, it is dependent on the interaction of multiple genes. Eye colour depends on the amount and distribution of a pigment in the iris called melanin. The iris is made up of two layers. Most eye colours have a lot of melanin on the back layer and the differences in eye colour come from the amount of melanin on the front layer. The more melanin, the darker the eyes will be. Besides giving the eyes colour, melanin helps to protect them from the sun. While you may share a similar eye colour with someone, how much melanin is in the iris and how it is distributed is unique to each person, as unique as a fingerprint!

An estimated 70% to 90% of people worldwide have brown eyes. However, the shades of brown vary greatly depending on the region where someone is born. Brown-eyed people in Europe tend to have lighter hues while people born in Asia and Africa with brown eyes tend to have darker eyes. Due to the amount of melanin, brown eyes are naturally more protected from the sun than lighter eyes.

Between 8% and 10% of people in the world have blue eyes, most commonly in Europe. People with blue eyes tend to have greater light sensitivity and better night vision than people with eyes of a different colour and are more likely to have red eye in photos.

Only about 2% of people have green eyes which are most common in Northern, Central and Western Europe. Green eyes are not due only to the amount of melanin in the eye, but also to the optical effect of light scattering off the melanin which makes them appear green.

People with hazel eyes have almost as much melanin as those with brown eyes, but it is distributed around the edge rather than the center of the iris. The term comes from the fact that this eye colour looks like a hazelnut, a light or yellowish-brown colour with specks of gold, green and brown.

Grey eyes contain less melanin than is found in blue eyes and scatter light differently. Throughout the world, only about 3% of people have grey eyes. Depending on factors like lighting and clothing, grey eyes may appear to change colour.

Amber eyes are rare but can be found throughout the world. Amber is a golden yellow or coppery colour without specks of gold, green, or brown. The iris contains mostly the pigment lipochrome and not much melanin.

People with albinism have little to no melanin in their skin, hair and irises. In some cases, only the eyes are affected. If the condition is mild, the eyes are usually light blue or violet. In rare cases, the irises are clear due to a lack of melanin, and the eyes may appear pink or red because the blood vessels are visible. Albinism is usually associated with severe vision problems.

When babies are born, they have light-coloured eyes because they have very little melanin in their eyes. Melanin production is stimulated by light. Eye colour changes over time, but due to a complex interaction of genetic factors, it is impossible to predict what colour the eyes will be as the baby gets older. It is possible for a child to have an eye colour that neither parent has. Typically, the biggest changes in eye colour occur gradually in the first 6 to 9 months of the baby’s life. By 12 months most babies have their permanent eye colour, although in some rare cases, changes may occur until the age of 6 years.

Because eye colour is due to reflected light, blue, green, and even hazel eyes can appear to change a little in different lighting conditions. Pupil dilation and contrast with skin or hair colour and even clothing can cause the eyes to seem a different colour. However, once it is set in childhood, the eyes can’t naturally change to a completely different colour.

There is a belief that eye colour changes with different mood states, but this is a myth, and there are explanations other than mood to account for apparent changes. For example, eyes can look darker when someone is experiencing extreme happiness or a period of grief. The pupil is more dilated at these times, creating the illusion that the eyes have become darker. Contrast is responsible for eyes appearing greener when you are angry. Anger can cause the blood vessels to dilate and become redder. This colouring can make it seem that your eyes are greener, but it is just the contrast to the redness that is causing this effect.

Certain factors can cause the eyes to change colour or in some cases changes to other parts of the eye can make the iris look different. These factors include disease, medications, trauma and aging. Eye colour change can be harmless, or it can signal a more serious problem. Schedule an appointment with your optometrist if changes are noticed and seek immediate medical attention if the change is sudden.

Iris freckles may cause the iris to appear changed in colour. These small brown spots on the surface of the iris are common and usually harmless and are often related to sun exposure, like freckles on the skin. Less common than iris freckles, iris nevi are larger freckles or dark growths on the eye that look like a mole. Nevi are caused by pigment cells called melanocytes. They are usually harmless and slow growing but can be a risk for cancer so should be regularly monitored.

Arcus senilis is a common usually harmless condition that affects older people. As we age, cholesterol may build up and form a hazy blue or white ring around the cornea.

A cataract is a clouding of the lens of the eye, behind the pupil, that makes it look milky or grey. Cataracts are common with aging and affect vision. In most cases, they can be successfully removed with surgery.

Uveitis is an inflammation of the middle layer of the eyeball usually caused by infection, trauma or exposure to toxins. It can make the white of the affected eye look red. There may be a noticeable change in eye colour if the iris sticks to the lens and changes the pupil’s size or shape. Uveitis requires immediate medical attention.

Injury or trauma to the eye can damage the iris, causing tissue loss and making the eye colour appear changed. Certain chronic medications can cause permanent eye colour changes, usually making eyes a darker shade of their natural colour over time.

Coloured contact lenses can be used to change eye colour, and it is even possible to achieve a subtle or more dramatic effect. Whether a prescription is necessary for vision correction or not, contact lenses should always be fitted by an optometrist, rather than purchased at a market or novelty store. Follow the cleaning instructions of the optometrist to prevent infection and never share contact lenses with anyone.