Aristotle was born in Stagira in north Greece, son of Nichomachus, the court physician to the Macedonian royal family.

Aristotle is one of the greatest thinkers in the history of western science and philosophy, making contributions to logic, metaphysics, mathematics, physics, biology, botany, ethics, politics, agriculture, medicine, dance and theatre. He was a student of Plato who in turn studied under Socrates. Although we do not actually possess any of Aristotle’s own writings intended for publication, we have volumes of the lecture notes he delivered for his students; through these Aristotle was to exercise his profound influence through the ages. Indeed, the medieval outlook is sometimes considered to be the “Aristotelian worldview” and St. Thomas Aquinas simply refers to Aristotle as “The Philosopher” as though there were no other.

Aristotle was the first to classify areas of human knowledge into distinct disciplines such as mathematics, biology, and ethics. Some of these classifications are still used today, such as the species-genus system taught in biology classes. He was the first to devise a formal system for reasoning, whereby the validity of an argument is determined by its structure rather than its content. Consider the following syllogism: All men are mortal; Socrates is a man; therefore, Socrates is mortal. Here we can see that as long as the premises are true, the conclusion must also be true, no matter what we substitute for “men or “is mortal.” Aristotle’s brand of logic dominated this area of thought until the rise of modern symbolic logic in the late 19th Century. 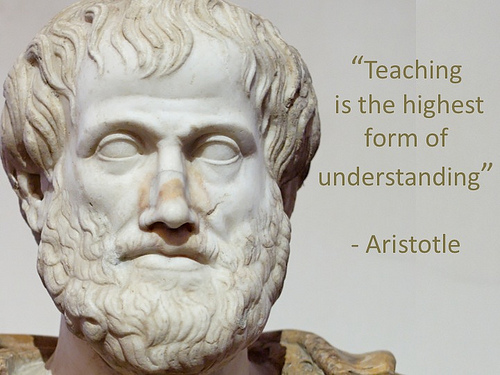 Aristotle was the founder of the Lyceum, the first scientific institute, based in Athens, Greece. Along with his teacher Plato, he was one of the strongest advocates of a liberal arts education, which stresses the education of the whole person, including one’s moral character, rather than merely learning a set of skills. According to Aristotle, this view of education is necessary if we are to produce a society of happy as well as productive individuals.

“Happiness depends on ourselves.” More than anybody else, Aristotle enshrines happiness as a central purpose of human life and a goal in itself. As a result he devotes more space to the topic of happiness than any thinker prior to the modern era. Living during the same period as Mencius, but on the other side of the world, he draws some similar conclusions. That is, happiness depends on the cultivation of virtue, though his virtues are somewhat more individualistic than the essentially social virtues of the Confucians. Yet as we shall see, Aristotle was convinced that a genuinely happy life required the fulfillment of a broad range of conditions, including physical as well as mental well-being. In this way he introduced the idea of a science of happiness in the classical sense, in terms of a new field of knowledge.

One of Aristotle’s most influential works is the Nicomachean Ethics, where he presents a theory of happiness that is still relevant today, over 2,300 years later. The key question Aristotle seeks to answer in these lectures is “What is the ultimate purpose of human existence?”

~ Read more at the pursuit of happiness